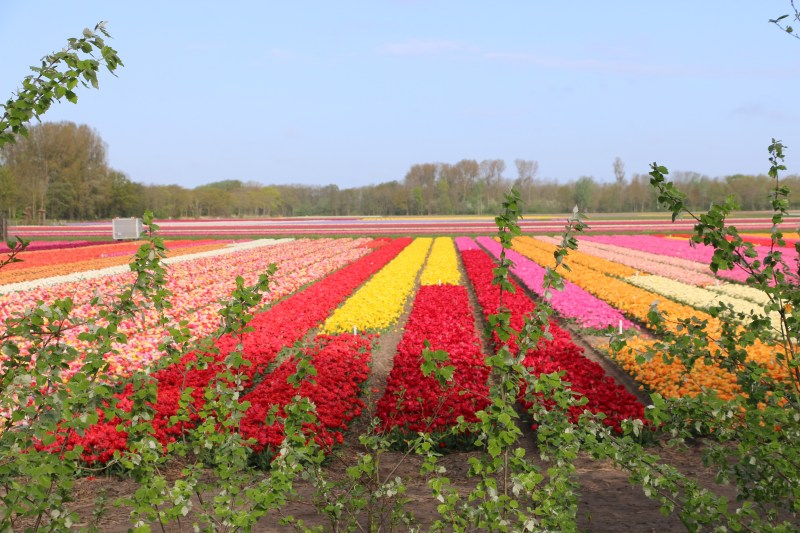 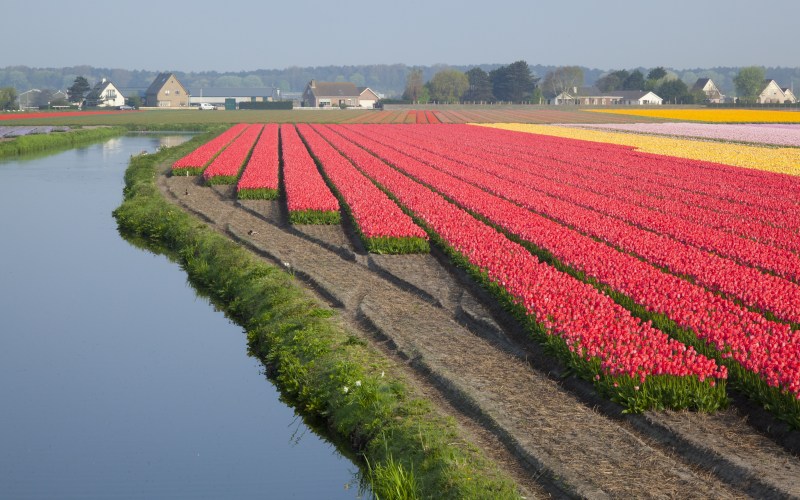 April 16 – Depart USA
Board your overnight flight to Amsterdam.

April 17 – ARRIVE IN AMSTERDAM, THE NETHERLANDS –
EMBARKATION
Welcome to Amsterdam, where you’ll board your luxurious river
cruise ship. (D)

April 18 – AMSTERDAM – HOORN
Enjoy a scenic cruise through the Ijsselmeer to Hoorn, where you
have a choice of three excursions. Visit a family-run tulip farm with
over one million tulips, each in different phases of growth and in
many species and colors. For those seeking to travel back in time,
you can visit the Dutch East India Museum, providing insight into
the Dutch Golden Age between 1500 and 1800. And for more
active adventurers, go for a guided bike ride through the Dutch
countryside. (B,L,D)

April 19 – MIDDELBURG
After enjoying a scenic cruise through the Delta, you can explore
medieval Middelburg, which was the second largest trading city
of the Dutch East India Company. Or, if you feel like exploring
the city on two wheels, a guided bike ride is the perfect choice.
Alternatively, you may venture off to the Delta Works storm
surge barrier, an impressive series of dams and Dutch hydraulic
engineering. More than half of the Netherlands lies below sea level
and the Delta Works were built to prevent a recurrence of the 1953
flood disaster. (B,L,D)

April 20 – GHENT, BELGIUM
There are several choices of excursions, depending on your
interests. For those who wish to discover two medieval cities,
Ghent and Bruges, you’ll wish to go on a highlights tour. Admire
Ghent’s canal-side architecture and some of its famous sights,
including the Castle of the Counts and Ghent Cathedral, and
then visit Bruges, one of the best preserved medieval cities in
Europe. Alternatively, you may go on a full-day excursion to
Bruges, which includes a visit to the Church of Our Lady, home
to the beautiful Carrara marble Madonna and Child sculpture by
Michelangelo. Those more inclined to learn about the art of Belgian
chocolatemaking can join a master chocolatier as he shares his
insights. And for those who wish to enjoy more free time, join a
walking tour of Ghent, followed by leisure time. (B,L,D)

April 21 – ANTWERP
Explore this trendy city on a walking tour where you’ll see Antwerp’s
Steen Castle, Grote Market and Brabo Fountain, along with the
UNESCO-designated Cathedral of Our Lady. For a more active
exploration of the area, join a guided bike tour. Or you can visit the
Rubens House, the former home of the famous 17th-century Flemish
Baroque painter. Later in the afternoon, you have a choice of two
excursions. Foodies will want to go on a culinary tour to indulge
in chocolate, waffles and beer. Flower lovers and gardeners can
roam through the Floralia, an annual spring flower show featuring
approximately one million bulbs that are handplanted each year by
the castle staff. (B,L,D)

April 22 – ROTTERDAM, THE NETHERLANDS – KINDERDIJK –
SCHOONHOVEN
During the morning, you can go on a walking tour of Rotterdam,
nicknamed the “Gateway to Europe,” and taste local specialties.
Or visit Delfshaven, where, on August 1, 1620, the Pilgrim fathers
departed on their epic journey aboard the Speedwell. Stopping in
Southampton, many then boarded the Mayflower and concluded
their journey at Plymouth Rock in Massachusetts. Alternatively, go
on an excursion to Delft, known as the home of the painter Johannes
Vermeer, Delft Blue earthenware and the Royal House. While here,
you’ll visit the Royal Delft Porcelain Factory and Museum. If you
prefer a more active adventure, then go on a bike ride through
Rotterdam and past some of its famous landmarks and architecture.
In the afternoon, venture to the UNESCO World Heritage Site
of Kinderdijk, a lovely village renowned for having the country’s
greatest concentration of windmills, all dating from the 18th century.
You may also pedal past the windmills from the seat of a bike. In
the evening, head to Schoonhoven, the “Silver City,” known for its
silversmiths and clock makers, and enjoy free time to stroll among its
shops and boutiques, or along the charming canal. (B,L,D)

April 23 – AMSTERDAM
One of the most impressive public gardens in the world, Keukenhof
presents a spectacular display of millions of flowering tulips spread
out over 70 acres. Spend time ambling through this legendary
garden, open only nine weeks a year and sometimes referred to
as the “Garden of Europe.”Later in the day, admire Amsterdam’s
historic harbor and canals, where you’ll see beautiful homes lining
the water and the fabled Skinny Bridge. (B,L,D)

April 24 – DEBARKATION – DEPART AMSTERDAM
Disembark the ship and prepare for your flight home. (B)